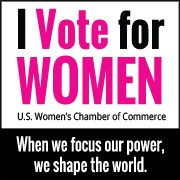 Alison Lundergan Grimes receives a 100% rating from the U.S. Women's Chamber of Commerce as a champion of women's economic priorities.

“Alison Lundergan Grimes will bring positive change to Washington by advancing reasonable policies that are fundamentally fair, make sound economic sense and will improve the lives of her community,” adds Dorfman. “As the first woman Senator from Kentucky, Grimes will employ the type of clear-headed, practical, people-first sensibility that she has displayed as an attorney, advocate for the people and Secretary of State.”

“Grimes is a champion of women’s economic priorities and understands how these priorities strengthen families, veterans, students, seniors and children in both urban and rural areas of Kentucky,” continues Dorfman. “For too many Kentuckians, Washington politics has not been focused on their needs leaving breadwinners searching for good paying jobs, mothers trying to find affordable childcare and small businesses struggling through red-tape and tight lending markets,” adds Dorfman.

“Alison Lundergan Grimes has proven that she knows how to pick the fights that are deeply important for her constituents and then she follows through as a true leader until the work is done and progress has been made,” says Dorfman. “As Secretary of State, she spearheaded efforts to create a one-stop shop for Kentucky small businesses to interact with multiple state agencies: the very type of government leadership that encourages business growth and job creation,” continues Dorfman. “Grimes will take the same steps for small businesses at the federal level.”

“Grimes fought with strength and tenacity for the voting rights of Kentucky’s 339,000 veterans – 30,000 of whom are women. In Washington, she will continue to fight for Kentucky veterans by working to end the backlog of pending compensation claims and improving job opportunities for veterans,” states Dorfman.

“Alison Lundergan Grimes has committed that the first bill she will sponsor in the U.S. Senate will be minimum wage legislation.  She will champion equal pay for equal work for women; strengthen  Kentucky families by assuring they have access to necessary paid family leave; support working mothers by delivering tax breaks to businesses that create on-site child care centers; assure small businesses have the access to capital they need to start-up, grow and create jobs; spearhead streamlining government processes that negatively impact small business start-up and growth; fight for equal access to federal contracts by women- and minority-owned firms; and protect and strengthen Medicare and Social Security,” states Dorfman. “Alison’s commitments – which simply expand on her already proven record of fighting for the people, are clear examples of how she will always put the people of Kentucky first in Washington, DC.”

“In contrast, Ms. Grimes’ opponent has been at the center of complete Washington dysfunction,” continues Dorfman. “Mitch McConnell was a facilitator of the massive government spending leading up to the economic crash.  And, since then, he has not focused on the bottom-line economic needs of Kentuckians.  Instead, McConnell has been the conductor of government shut downs, special big business privileges and has voted repeatedly against women’s economic interests,” adds Dorfman.

“Even though about seven in ten Kentucky minimum-wage workers are women, Mitch McConnell voted against raising the minimum wage seventeen times,” states Dorfman. “Even though over 460,000 women in Kentucky are over age sixty, Mitch McConnell wants to privatize Social Security and end Medicare as we know it. Even though 100,400 Kentucky businesses are women-owned employing 84,700 Kentuckians, McConnell has done nothing to improve their access to capital or federal contracts. Even though not paying woman equally for equal work is fundamentally not right and places undo economic pressures on families and children, McConnell mockingly called a vote to support this fundamental right just, ‘another special interest vote’.”

“Mr. McConnell clearly does not realize, without the influx of women into the work force over the last four decades, America’s gross domestic product would be just seventy-five percent of what it is today,” asserts Dorfman. “Women’s workplace and entrepreneurial productivity is vital to our economy’s growth and the economic security of American families. We need to keep women in the workplace, growing businesses, creating jobs and contributing positively to our economy.  That’s what creates jobs, opportunity and family security,” continues Dorfman.

“Growing the number of strong women’s economics champions in the United States Senate is critical to our country,” states Dorfman. “American prosperity is directly linked to the economic success of women. And, as women represent the majority (nearly fifty-three percent) of Kentucky registered voters, Alison Lundergan Grimes knows and respects that we are hardly just ‘another special interest’ group.  To the contrary, in Kentucky and all across America, women are the majority vote.” concludes Dorfman.

“Kentucky urgently needs new leadership in the United States Senate.  Alison Lundergan Grimes is in tune with the needs of Kentucky communities and will be an independent, thoughtful and effective leader who will take Washington in a new direction. We are proud to endorse her candidacy and look forward to her leadership in Washington, DC.”