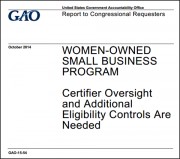 US Women's Chamber of Commerce calls upon President Obama, the Small Business Administration and Congress to make a real commitment to women-owned firms; bring accountability in contracting to women-owned and all small business contracting programs.

Washington, DC, November 11, 2014 (Newswire.com) - The U.S. Women’s Chamber of Commerce (www.uswcc.org) announced today a critical challenge to the President, Small Business Administration (SBA) and Congress to act immediately to bring real accountability in contracting to women-owned and all small business federal contracting programs. This call to action follows the publishing a long awaited Government Accountability Office report, released on November 7, 2014, on accountability in the SBA oversight of the women-owned small business federal contracting program. The GAO report, provided to Senators Maria Cantwell and Mary Landrieu, Chair and Former Chair of the Senate Committee on Small Business and Entrepreneurship, details systemic and costly failures by the SBA in the oversight of the women-owned small business set-aside program and of socioeconomic programs across the entire federal marketplace.

“The U.S. Women’s Chamber of Commerce was alarmed to find the GAO report included the disclosure that more than 40% of women-owned set-aside contracts were awarded to ineligible firms in FY 2012 and 2013,”[1] stated Margot Dorfman, CEO of the U.S. Women’s Chamber of Commerce. “This lack of accountability does not end with just women-owned set-asides. Per the GAO, statements made by SBA officials disclose that the levels of ineligibility found during their examination of the women’s program were similar to those found in examinations of its other socioeconomic programs,” adds Dorfman. “The GAO report also reveals the SBA is doing very little to prevent ineligible firms from attesting their status as women-owned in the federal database of contractors, receiving set-aside contracts and being counted toward government-wide women-owned small business annual contract goaling reports.”

“It is clear, the SBA’s support of women in business is not what is so consistently purported in SBA press releases,” continues Dorfman. “When assessing the financial results of ineligible firms receiving women-owned set-asides (and the federal government erroneously counting ineligible firms as ‘women-owned’ for federal goaling reports with or without set-asides), the extent of the innacuracies and subterfuge translates into billions of dollars misattributed as contracts awarded to women-owned firms every year.  In FY 2014, the potential real dollar losses for legitimately women-owned firms, as the SBA misreported the actual dollars awarded to women-owned firms, may be over $5B,” adds Dorfman.

“While the GAO report focused on women-owned firms, the SBA’s disclosure regarding ineligible firms in the federal database across all socioeconomic sectors combined with the GAO’s observations regarding the lack of oversight by the SBA should be a call to arms for the President, Administrator of the SBA and Congress to step up strongly and swiftly to protect the rights and opportunities of women-owned and all small businesses,” adds Dorfman.

The GAO report has many more important disclosures, including:

(2) Lack of Responsiveness: The GAO reports it was unable to interview the largest third-party certifier in the women’s program, stating: “We were unable to interview the Women’s Business National Enterprise Council (WBENC). SBA requested documentation of WBENC’s oversight procedures for the certification activity and fee structures of its regional partner organizations. WBENC provided a written response to SBA, which was not fully responsive to the request, as discussed in the report.” And, the GAO states, “SBA did not follow up on the incomplete response from WBENC, which raises questions about SBA’s commitment to oversight of the certifiers.”

(4) Reports of Potential Fraud Ignored by SBA: A review of the monthly reports from third-party certifiers found one certifier listed one or two reports of potential fraud among businesses denied certification in sixteen of the thirty-four months reviewed. However, the SBA did not investigate these reports of potential fraud.[5] The GAO states, “When we asked SBA officials how the agency addressed such concerns, an official responded that fraudulently entering into a set-aside contract was illegal and the business would be subject to prosecution. However, without SBA following up on these types of issues, it is unclear how businesses committing fraud in the program would be prosecuted.”

“For too long, the SBA has issued press releases expounding their devotion to women-owned firms while not matching their rhetoric with a real commitment to insuring small businesses, including women-owned firms, that ‘a fair proportion of the total purchases and contracts or subcontracts for property and services for the Government be placed with small-business enterprises,’ as per SBA’s federal charter,”[6] claims Dorfman.

“It’s time for the President, SBA Administrator Contreras-Sweet and Congress to step up and fix these problems. Women business owners are watching,” concludes Dorfman.

The U.S. Women's Chamber of Commerce (USWCC) is the leading advocate for women on economic and leadership issues.  As the economic leader for women, the USWCC creates opportunities, drives progress, advocates, and provides tools and solutions to support the economic growth of women across America. The USWCC (uswcc.org) is a not-for-profit 501(c)6 organization founded in 2001 with over 500,000 members; its headquarters offices are located in Washington, D.C.  Contact the USWCC at 888-418-7922.

[2] Derived from federal data available at http://smallbusiness.data.gov/ and deducting 40% from the reported actual dollars spent with women-owned firms between FY 2000 and FY 2014.

[5] The U.S. Women’s Chamber of Commerce, as a third-party certifier for the WOSB program included potential fraud reports as stated by the GAO and must assume that the GAO is referring to our reports of potential fraud among denied firms.