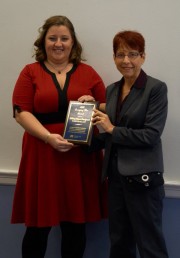 The U.S. Women's Chamber of Commerce is proud to announce our Women Contractor Award Winners for 2016. The awards ceremony took place on March 16, 2016 and 5 awards were given out.

Washington D.C., March 17, 2016 (Newswire.com) - ​​The U.S. Women's Chamber of Commerce is proud to announce our 2016 Women Contractor Award Winners given to firms who have achieved outstanding success as suppliers in the federal contracting arena. The awards were presented in Washington, DC on March 16, 2016 at the U.S. Women's Chamber of Commerce National Small Business Federal Contracting Summit.

A special “Champion Award” was also given to Congresswoman Nydia Velázquez, Ranking Member of the House Small Business Committee. The Congresswoman received this distinguished award for exemplary courage and leadership towards the advancement of women-owned small business federal suppliers.

"Women-owned federal suppliers are actively competing in the federal marketplace," says Margot Dorfman, CEO.  "The U.S. Women's Chamber of Commerce recognizes firms who stand out for the achievements they have made," adds Dorfman.

STELLAR:  Awarded to exceptional federal suppliers who have shown exemplary growth and quality and are positioned as leaders within the contracting community.

Ms. Sangita Patil has been the Owner, President, and Managing Member of AEEC since its inception in 1995. She is in charge of corporate management, operations, financial, and strategic planning. Through her leadership, management skills, and vision, AEEC has continued to sustain and achieve aggressive business growth with robust financial business stability. Under her leadership, AEEC was recognized with Deloitte Technology FAST 500 awards from 2009 through 2012 and has grown significantly in the years since, winning major contracts at DIA, DOD, DHS, USDA, and USPTO, and achieving CMMI Level 3, ISO 9001, ISO 20000 and ISO 27001 certifications.

GROWTH MASTER: Awarded to exceptional federal suppliers who have achieved significant growth in the government sector over the last three years.

Joni Anderson is the President and Founder of the Engineering, Procurement, and Construction firm of Anderson Burton a nationwide and outer continental US company. Established in 1999, Joni’s exemplary entrepreneur mindset drove her firm to great success with nearly 300 employees within its first decade. Despite Joni’s pivotal success as a women-owned business in a male dominated field, the market crash of 2008 would quickly off-set Joni’s success and strip Anderson Burton’s team to only 4 employees. Yet, Joni’s visionary mindset would not tolerate such devastation upon her firm and thus she found herself in Afghanistan pursuing opportunities that would keep her firm afloat. Fast forward to 2015, Joni’s firm operated at $28 million with ambitious projects, executed several LEED Platinum facilities, completed high visibility historical projects for the National Park Service in parks such as Yosemite National Park, selected as 2015 Small Business Administration’s “Prime Contractor of the Year” Award for work in the U.S. Region 9 (Guam, Hawaii, California, Nevada and Arizona) for the Department of Defense and Civilian Agencies, and nominated as Inc. magazines 5000 fastest growing companies (ranked 3762nd in North America).​

INNOVATION & PERFORMANCE: Awarded to exceptional federal suppliers who exhibit outstanding innovation and/or performance on a key contract that will significantly bolster their ability to secure future opportunities.

Urvashi Malhotra is the President of Changeis, Inc., where she conducts and manages corporate operations and oversees the management of the company, its employees, vendors, and consultants. She is actively involved in client engagements, providing leadership on strategy, implementation, and quality assurance. She is also heavily engaged in building new and existing client relationships to earn new business and ensure customer satisfaction. Urvashi has nearly 17 years of business management experience, specializing in econometrics and financial modeling, as well as complex data analysis and management. She previously worked for a top economic consulting firm, where she constructed complex financial and economic models for high-profile litigation, strategy, regulation, and policy on behalf of clients. In previous roles, she has supported development of strategies, products, standards and processes, and has conducted numerous compliance reviews and assessments related to public securities.

Hillary Boyce Doriguzzi - Owner, ProHill Services, LLC [ Virginia Beach, Virginia]
Mrs. Hillary Boyce Doriguzzi is the owner of ProHill Services LLC, a very new small 100% woman and veteran owned government contracting company that provides professional services to U.S. military programs. Since ProHill Services’ inception, less than 5 months ago, we have been blessed to win several prime competitive contracts for the U.S. Army, Navy, Air National Guard and Military Entrance Processing (MEPS) Command. Mrs. Boyce Doriguzzi has over 15 years in business development and contract management within the Department of Defense (DoD) market and also served as member of the U.S. Army National Guard and active duty in the U.S. Army where she served both CONUS and OCONUS assignments. She severed in the Army as an Engineer and later reclassified to be a Personnel Administration Supervisor with a passion for military Human Resources and Family Support Programs.

The U.S. Women’s Chamber of Commerce provides business and financial education and resources for women and works to achieve fundamental budget and policy priorities that support women’s economic opportunities, security and family well-being.  The U.S. Women's Chamber of Commerce (USWCC) is the leading advocate for women on economic and leadership issues. As the economic leader for women, the USWCC creates opportunities, drives progress, advocates, and provides tools and solutions to support the economic growth of women across America. Women and men interested in joining and supporting the U.S. Women’s Chamber of Commerce, are invited to connect with the chamber by calling (888) 418-7922 or by visiting www.uswcc.org.